How can we help you today?

There are many reasons for locked segments. Below you will find the most common causes with a proposed solution:

Sometimes PM who was creating a given project or was assigned to it will decide to disable ICE match edition. If only ICE matches are locked, then most likely it's due to this checkbox being unchecked in your project's general info panel (visible only to PMs and admins)

While obvious for some users, this is the most common cause for locked segments. XTM allows a user to view the Editor/Workbench in either Edit or Read-only mode. The latter bars you from making any changes to the translation, thus locking segments. 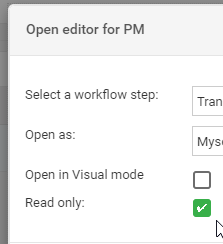 Locked by another user

Our editing tool allows only one user to operate on a given part of the document at a given time. If for example, you have your file opened in the 1-100 segment range, the second user that attempts to access that part of the file will have them locked out. This behavior can be modified by the utilization of different workflows and some additional option, but as a rule of thumb, in standard scenarios, this can be the cause of the locked segments.

In some rare cases, if a user closes improperly XTM with the Editor/Workbench opened, his session (opened Editor/WB) can linger for a while, blocking your access to segments as if the user is still working. In such cases, waiting 5 minutes before accessing again the file should help.

It was also shown that if the lock is only on one file and does not time out after some duration, moving your workflow back or forward solves the issue.

Locked by a contractor

If your company received a project from a contractor, such a project is governed by the contractor's settings. If the contractor has some segment-locking options enabled, chances are that this is the reason behind this issue. Please ask your contractor to review project-related settings that were mentioned above. If you are a linguist, please ask your Project Manager to relate your questions to the contractor.

Locked by an approved user

If your segments are locked, usually when you hover over the padlock icon, a proper message indicating the root cause of the lock will be displayed:

Did you find it helpful? Yes No

Send feedback
Sorry we couldn't be helpful. Help us improve this article with your feedback.